Since 2019, Franklin ATA Martial Arts has provided its members with a road map to success based on
self-defense, confidence, and goal-setting skills. 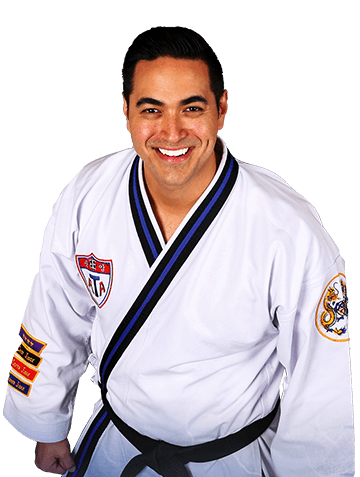 I KNOW HOW DIFFICULT AND CONFUSING
FINDING A MARTIAL ARTS SCHOOL CAN BE.

I remember when I was a child, feeling uncertain about beginning martial arts. I wondered if I had what it took to succeed and I wasn’t the most athletic or confident child - quite the opposite. Little did I know that beginning my martial arts journey would be one of the most profound experiences of my life!

When I became the Chief Instructor of this school I made a commitment to serving and empowering the community of Franklin by teaching children and adults the confidence, leadership, and fitness skills that can only be achieved through martial arts.

WE SHARE & TEACH THE SAME VALUES YOU TEACH AT HOME.

You may have experienced boredom with your usual fitness routine or reached a plateau in your performance or physical fitness results. ATA Martial Arts for adults is the perfect alternative to a boring gym routine, as it helps you develop into your maximum potential both physically and mentally by providing real-life self-defense strategies in a fun, focused environment.

Each instructor has passed an intensive certification process based on 40 years of tradition, research, and development.

To Train in the Highest Quality Martial Arts Program Available

To Focus On Personal Development in a Positive Environment

To Offer Programs Accessible & Enjoyable by People of Any Age

WHAT IS SONGAHM TAEKWONDO?

Songahm Taekwondo is the style of martial arts practiced by ATA Martial Arts students. While famous for its wide range of kicks and known as the "Kicking Art", Taekwondo also emphasizes breaking power, such as splitting wood and bricks using only the bare hands and feet. Training involves a variety of techniques, including punching, kicking, dodging, jumping, parrying, and blocking. Taekwondo also focuses on sparring and learning formal patterns of movements called forms. Songahm Taekwondo is a style specifically developed over 20 years by Eternal Grand Master H.U. Lee to make it accessible to anyone willing to learn and to truly reflect Taekwondo and the strength and beauty of its kicking techniques.

The journey from White Belt to Black Belt (10 belts total) is one of incremental learning and skill development that students of any age any fitness level can embark on.

Each belt in Martial Arts is full of meaning and philosophy. As the belt colors progress from white to black, it symbolizes the knowledge and power the student has obtained and experienced.

One of the most fun parts of martial arts training is the ability to test your skills by competing in a tournament. Tournaments are not only fun for competitors, but they also become a great social experience for parents as well! There are currently 130,000 ATA Martial Arts members worldwide. ATA Martial Arts students compete in local tournaments against other ATA schools, advancing from State levels to District levels, to yearly National competitions in Las Vegas, NV, and Orlando, FL. The competition winners gather at the ATA World Expo Tournament in Little Rock, AR in the summer, competing against finalists in one of the largest martial arts competitions in the world.

Limited Trial Offers are Available, Act Now!
This is your chance to try our martial arts program at a reduced price with no commitments!

The family atmosphere coupled with the genuine desire to see every person excel sets this school apart.

The instructors are incredible with the kids, my son would choose to go every night if it was available!

I still remember the first day I decided to drop my daughters off at karate, one of them threw up outside because she was scared to be alone. Now when I drop them off, they wave me goodbye and look forward to enjoying the lessons. It has been a year and there has been a drastic change in them. They have become confident and their self-esteem has increased. They are surer of themselves and are much more forward in what they do. Thanks a ton in bringing these changes in my kids' lives. Wish you all tons of success

Karate had impacted my life by giving me confidence. Another way it has impacted my life is by making me treat other people with respect and courtesy. It is also good exercise and it’s very fun.

I began to take class after watching my family take classes. They enjoyed themselves & my doctors all told me that I needed to exercise, especially after being diagnosed with fibromyalgia. When I began, I was on nightly medicine for the pain. Now, 2 years later, I am no longer on any medicine, & my doctor called me a “poster child” of what to do with fibromyalgia. It has taught both of my children the meaning of commitment & goal setting. Jon’s speech has improved so much that he will soon be dismissed from the speech program. He also has much more confidence & is willing to try new things. My daughter is enjoying the exercise & newfound confidence. She enjoys competing in tournaments, helping others, & has learned that practice makes better & applies this to her school work. My husband enjoys the health benefits of TKD & uses it to stay in shape & as a stress reliever.

Master Burns is a very engaging instructor. He also takes the time to really understand how each of his students learns. He inspires them to always do their best and to work hard to achieve their goal. Be prepared to learn from the best!

Master Burns is no doubt the best of the best. He’s passionate, disciplined, fun to be around and overall a great leader. For the past 2 years, I’ve watched my son not only learn self-defense, but gain self-confidence and valuable life skills to become a better version of himself. I’m thankful my son got the opportunity to be one of your students.

Training under Master Burns is an extraordinary and fun gift. I've been training under him for over 6 years and my life has improved phenomenally. He is engaging, disciplined, and you will love every minute of him. Just stop in to welcome him to Tennessee!

Master Burns is an awesome instructor, mentor, coach, guide, and person. He is diligent, patient, determined, focused and has a big smile once in a while. He will succeed due to his passion for the art and sport.

Master Burns is an amazing and talented instructor. My son earned his 1st degree and 2nd degree black belt under his training. Master Burns engages with the kids where they enjoy being in class and are excited to learn martial arts! He played a big role in who my son has become today. He has taught him not only self-defense skills, discipline, and self-confidence, but has also given him life skills on how to be a better person!